According to the India Meteorological Department, Cyclone Gulab is expected to make landfall on the coastlines of Odisha and Andhra Pradesh around Sunday midnight. Rescue teams are being assembled in the states, and preparations for disaster aid are being reviewed.
At 8:30 a.m. on Sunday, the centre of the cyclone was approximately 180 kilometres east-southeast of the coastal town of Gopalpur in Odisha and 240 kilometres east of the city of Kalingapatnam in Andhra Pradesh. 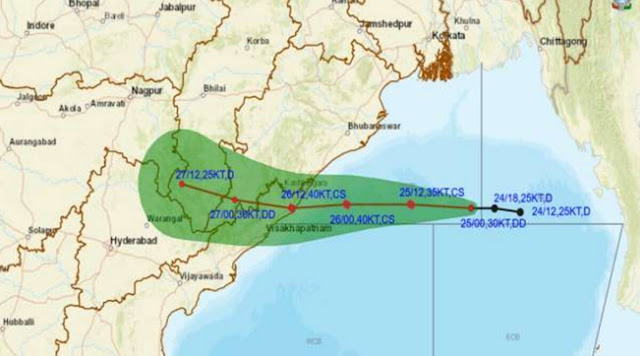 According to the forecast service, the cyclone will pass between the "north Andhra Pradesh-south Odisha coastlines" between Kalingapatnam and Gopalpur around midnight on Saturday. According to forecasts, the wind speed may reach up to 95 km per hour.

According to the India Meteorological Department, the process of the cyclone's landfall is expected to begin late in the evening.
The Hindu newspaper stated that sporadic rains have begun in certain areas of South Odisha. Hotels in the Gopalpur area were evacuated as the tidal surges reached dangerous heights.
According to the Indian Meteorological Department, exceptionally heavy rainfall was expected in portions of southern Odisha and northern coastal Andhra Pradesh.
The National Disaster Response Force has dispatched 13 teams to Odisha and five teams to Andhra Pradesh in response to the disaster. According to The Hindu, rescuers have already begun evacuating residents from the districts of Ganjam and Gajapati in Odisha's Ganjam district. Approximately 8,000 individuals will be relocated to more secure locations.

According to the Odisha Disaster Rapid Action Force, more than 100 fire brigade teams and 42 teams of the Odisha Disaster Rapid Action Force have been dispatched to the districts of Gajapati, Ganjam, Koraput, Rayagada, Nabarangpur, Malkangiri, and Kandhamal.
Meanwhile, in Andhra Pradesh, Chief Minister YS Jagan Mohan Reddy met with authorities on Saturday to assess preparations for the storm, according to the Press Trust of India.
Disaster management personnel in the districts of Srikakulam and Visakhapatnam have been put on high alert. Relief camps are being established by district collectors in a number of places. Control rooms have been built in village secretariats, according to a report by PTI.
A total of 28 trains have been cancelled as a result of the weather alert, according to the East Coast Railway Company. In addition to the five trains that have been postponed, a similar number of trains have been diverted.
Cyclone #GULAB Emergency helpline number of Hinjilicut Municipality - 8480528957.

In a statement issued on September 25, the Odisha government warned residents to be on the lookout for the approaching cyclonic storm dubbed 'Gulab,' which is anticipated to strike the state's southern regions and northern Andhra Pradesh on September 26 at midnight with wind speeds of 75-85 kph.

According to the Indian Meteorological Department, a 'Gulab' has developed over the northwest and adjacent to the west-central Bay of Bengal. The Indian Meteorological Department has issued a cyclone warning for the coastlines of north Andhra Pradesh and bordering south Odisha. As previously stated, the IMD predicts that the cyclone will travel first west-northwestward for the next 24 hours, then west-southwestward after that, and will reach the south Odisha-north Andhra Pradesh coast between Visakhapatnam and Gopalpur near Kalingapatnam by the evening of Sunday. Meanwhile, the East Coast Railway (EcoR) zone of Indian Railways has decided to cancel or short terminate several trains in order to ensure the safety of passengers and train operations.
The International Meteorological Department's Director-General (DG), Dr Mrutunjay Mohapatra, stated that wind speeds will range between 75 kmph and 85 kmph, with gusts reaching up to 95 kmph. According to the National Hurricane Center, the cyclonic storm 'Gulab' was located approximately 370 kilometres east-southeast of Gopalpur in Odisha and 440 kilometres east of Kalingapatnam in Andhra Pradesh at 5 p.m. on Saturday. "Pre-cyclone: Keep an eye out for storms around the beaches of north Andhra Pradesh and bordering south Odisha." In a tweet, the Bhubaneswar Meteorological Centre stated, "Depression across East-central and neighbouring Northeast Bay of Bengal: Pre-Cyclone Watch for north Andhra Pradesh and adjoining south Odisha coast."